Day two started off at 6-ish in the morning when I began getting ready. I had a nice bubble bath thanks to my Lush bubble bar and bath bomb (Dragon’s Egg, isn’t that pretty but meh). I left around 8-ish after getting ready and headed out to Koreatown. I accidentally got on the wrong bus for three stops, made my way to Burger King for coffee, got on the right bus and all was well.

The first thing I did was reload my Tap card. Tap is LA’s transit card and it’s $25 for a week long fill up. It’s $1.75 a ride otherwise, so it’s not too bad and it works for ALL public transport (looking at YOU, Chicago). *Edit: Green buses, Dash buses amongst other Tap transport that don’t use weekly passes (Who knew?) use stored credit on your tap card, make sure you fill that up as well.

Anyway, after that my first stop was Daiso. I told my friend Leigh that I was going to get her cute stationary, and I did. Then I got myself cute stuff too. I’ll be making a haul post once my trip concludes and I’m back home.

After Daiso, I made my way to the Koreatown Plaza, where I hit up Artbox, Music Plaza, and Bosco’s Bakery Cafe. I got three different kinds of bread to go with the latte I bought at Daiso. I had cheese bread, orange cheese bread, and sweet potato bread. Those three cost around $8.

Sweet potato was kinda meh and the cheese bread is cream cheese but what did I expect, and the orange bread is filled with orange flavored cream cheese. It filled my tummy though, so I trudged on afterward (it was my first stop in the plaza) to Music Plaza, where I bought two albums and then waited for my other one (it was being shipped to the store at the time).

I went to Artbox, knocked stuff down by accident with my bag (extremely mortified) and bought one thing in there for my friend since it had to do specifically with a character that she liked.

I then went to the Galleria, where I ate lunch at 강서멘옥, where I had mul naengmyeon (몰냉면), or cold noodles from a GIGANTIC BOWL with radish kimchi and a Coke. 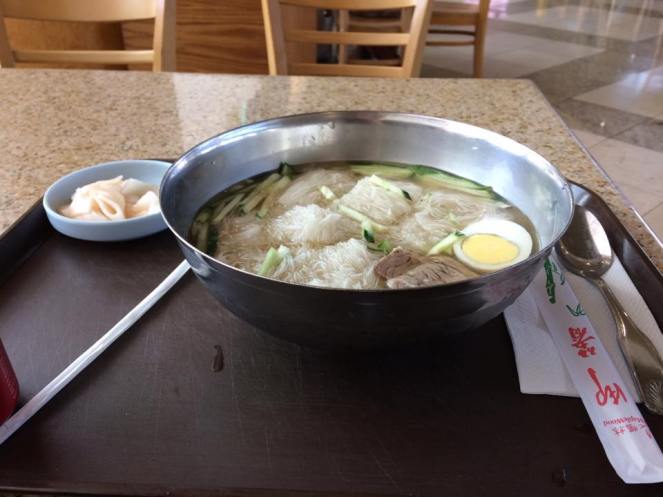 After that I went to Choice Music LA and bought an album, then I went downstairs to the market where I bought some groceries for dinner while getting stared at by old Korean people. The young people didn’t give two shits and the middle aged/less than middle aged people were too busy rounding up their kids and not looking at me.

However, I needed dinner and drinks so they were just gonna have to deal with my weird, white Midwestern self up in the grocery store.

Then was the trek home. Two cramped bus rides later I came to the corner of my street and got settled back into my room and started making dinner.

View the video below for a small recap and room tour:

So now I’m editing stuff and listening to Hallyu And A Biscuit. That’s right, they’re back on the air, so tune in every Friday!

Thanks for watching/reading, stay tuned for more adventures! I’m heading to APOP Fest tomorrow, so get ready for coverage from that as well.