KCON came and went in the blink of an eye. Even if I didn’t make it to the beach as planned, I still had one of the best trips of my life.

KCON Day 3. What can I remember about Day 3…I finally got to the Soompi booth. The day before they stopped taking people in the late afternoon. Almost every day the line curved around the corner. I got two bags. There was a black bag that said ‘K-Pop Trash’ and some rubber bracelets were inside. You also got a chance to spin the wheel and win a poster (I got a poster for “Lucky Romance“) and I also won a Zodiac keychain (I got a Monkey, cuz that’s the year I was born in).

I bought the last SS301 album that the CD booth had, and was pretty proud of myself to be quite honest. And by last, I mean the girl had to reach underneath the plastic and pull the album out from the table.

I got several other drama posters, visited the fanclub booths, and watched Danny host Astro‘s interview at the Toyota booth, made friends in lines that I waited in, got a free poster from the DramaFever booth (“Uncontrollably Fond“), bought a shit ton of posters, banners (SHINee and G-Friend), TVXQ calendars (from the fan booth), and even though I don’t quite remember how many posters I bought at KCON (at least 4) I came home with 19. 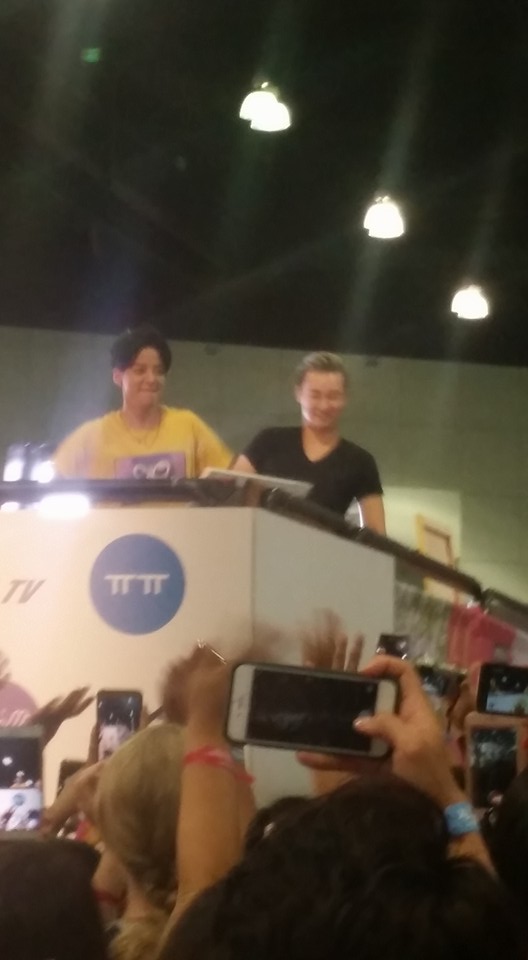 After that me and my friends saw Gemini again, and I figured since I was being bold this KCON, I’d ask for a picture, so I did.

I know my friend Dara loves Gemini, so really, I thought of her the whole time. 🙂 Ignore my hideous purse, I just bought it so I could stuff crap in it.

I bought about…20 face masks from the booth outside (2x 10-packs), which is also where I bought my sister her birthday present (a G-Dragon shirt) and a SHINee poster…okay the poster was free, but I had a coupon!

Me and my friends had lunch outside at the Food truck area, and when we finally got in line, we ended up not getting there until after the lines had formed, and I had to wait almost an hour to get in. It was awful, the organization was terrible that day.

However, I made it in, and the concert was AWESOME! This was the night that the girl in front of us WOULDN’T FUCKING SIT DOWN, and when BTS finally came on, I turned behind and at least told the other people that we were going to have to stand up because we wouldn’t see. They seemed to be understanding.

I loved every minute of the concert, even if the girl in front of us was pissing us off half the damn time.

View the pictures below:

And so ended KCON. The day after, I had a whole day to myself. I headed down to the K-Town plaza, and went back to Music Plaza, and bought a giant BoA poster, several other posters and CDs.

I went to Aritaum and bought several packs of masks, and I had coconut milk tea from a shop called Nicole’s Gourmet Coffee and Chocolate. It was delicious.

I went to the K-Town mall a little ways away. It’s smaller, but they have a Music Choice shop. I stopped there, bought some stuff, met a group of people and made some friends. Later, I made my way to the Korean market and bought some stuff (shrimp chips, rice flour, sweet potato starch noodles and azuki beans) that I can’t get at home and since I was there, why not?

After walking around and pretty much shopping till my wallet cried and my feet were about to fall off, it was time to head back to the hostel.

I forced myself to stay up all night. It was awful. I was soooo tired. Staying in the Chicago airport most of the day was so boring. Took a nice nap though. My flight actually made it home on time and that was that.

I had a great time, with new and old friends and all my crap. By the way, I made a video about my crap. I love it, but there was SOOOOO much.

Thanks for sticking around for my KCON LA adventures! See you next year, KCON!