A lot happened the first day. It was so overwhelming. And it’s where I earned my catchphrase, “Well in LA…”

So anyway, my friend Jenna got up earlier than us with our friend, let’s call him *Dan*. She got Platinum, so she was going to the fan engagements. The rest of us, Leigh, Leigh’s boyfriend *Mitch* and Molly, well and myself got up later and we went to the train station. It took us a little bit to get our tickets, but we also met two other people going to KCON.

We bumped into them multiple times throughout the convention. They were nice.

So we go there, I have my ticket on my phone. In LA, they scanned the PR code on my phone and let me get my perks and stuff last year without my physical tickets. Not in New Jersey. I had to go all the way to the box office, have them printed off, and THEN go back and get my stuff.

I got an Ailee Audience, BTS Audience AND AN ERIC NAM HIGH TOUCH

THAT’S RIGHT, I TOUCHED HIS FLESH, BE JEALOUS.

Sorry, but that was so exciting. Actually, I got a Day6 audience, but I’m not super into Day6. Well, while I was talking to my acquaintances from the train station, someone came up and offered to trade when they heard what I got, and that’s how I got to see Ailee up close.

So I ran to find where I was supposed to stand, we went through the line, and entered. I met my friend Becky for the first time at KCON, and we ended up going to the Ailee engagement together.

However, I didn’t know about the selfie at the end, I’m just used to …in LA, they hosts keep talking until they tell you to leave without running. Okay. So I leave. Only to find out later that Ailee took a selfie with everyone.

Oops. Anyhow, since I didn’t have any other fan engagements that day, my friend Becky and I went out and adventured around KCON NY! I got some free masks from the E Nature booth at the K-Beauty tent.

Sorry guise, I’m really trying to remember. At this point (the pic and onward) it’s been a month, I’m sick and trying to recall memories.

Okay, so after that, if I remember correctly…was the concert…after the con.

Crush ended up performing first, and boy, did he get the ladies wet…because his ass threw water bottles on everybody.

Then Ailee came onstage, it was all badass and great as she started up “Mind Your Own Business,” and then…the music stopped. Everyone was confused and looked around for a minute before Ailee kept going and sounded just as amazing without music as she does with it. 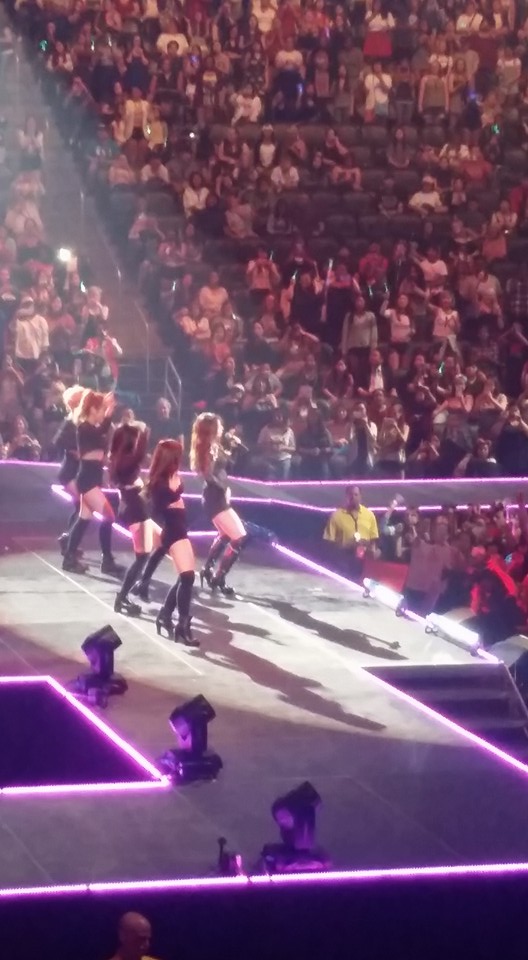 Then they fixed it and she started over. The rest of the show went on without a hitch.

After Ailee was Seventeen, and from where I was sitting, I could see them through the backstage curtain. They’re so cute. And thus, Vernon has infiltrated my bias list. The sweet lil potato.

Oh my gosh you guys, they performed Super Junior’s “Sorry, Sorry” and I lost my ever-loving shit.

It was so great.

After that was BtoB. I remember when they debuted. Ah, the memories. It was so great. AND ILLHOON GAVE MY FRIEND JENNA A HEART. I AM SO JEALOUS!!!! If my memory serves me right, that was the last performance.

I’ll be creating an album of photos [and, if I can find them] videos and I’ll post a link here after it’s done. I took almost 400 photos the first day, it was crazy.

Well, that’s it for day one of KCONNY, stick around for day two!!!!