Day 2 of KCON began at 9 AM, I was a little early, so I hung out with my friends at their hotel, which was just a few blocks away. I didn’t want to be late, so I had to head out without them since they were preparing for a cosplay contest.

I made it there around 10 or so, just in time to get in line for Monsta X‘s fan engagement.

You line up inside, then go outside, wait for the Hi-Touch people to go in first, then you go in, there’s two lines, they take your ticket and you stand in a crowd waiting about 1 hour to 30 minutes, depending on how early you are, and then wait for the commercials to stop so that the moderator can come out (Shin B did most that I went to, and it was Shin B this time as well). They have a small interview, and then the Hi-Touch begins. 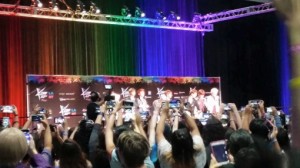 I have a video or two…yeah, two of the meet and greet which you can view below:

After that, I went over to the tvN booth, and they had a meet and greet with actor, So Ho Jun, so I took… a lot of pictures, but I’ll just post a few: 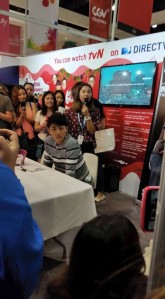 I walked away and boom! Roy Kim. Sorry if it’s fuzzy, my zoom sucks. And after THAT, I watched Shin B perform and got to meet her again, so I took a picture with her. I made a friend while I was watching Roy Kim and Core Magazine, I can’t remember how to spell her name, so let’s call her Ri. 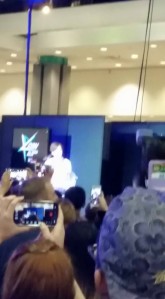 I took some videos of Core Magazine (I’ll add those in later, they’re uploading at the moment), I really liked how they sounded and they even performed at the main stage during the concert. Can’t remember which night, but they did.

Anywho, apparently, Ri is a huge Shin B fan and she goes and supports her as much as she can, and Shin B even recognized her when she went to get her photo taken with her.

After we got to talking, I was talking about how I couldn’t find a booth that had a relatively affordable Shinhwa poster, so she took me by my hand and led me to a booth with TWO Shinhwa posters. But were they for sale/selling any Shinhwa posters?

The answer, dear readers, is no. They were not. However, we went to check out some shops. We looked at a taser for your phone case, phone cases where they didn’t have any for my or her models, a beauty shop that goes by LEADERS.

Soon after, we parted ways since she wasn’t staying for the concert. At some point, I played a game over at the tvN booth, which they had you use chopsticks to pick up at least 5 coffee beans in 20 seconds to win…chopsticks and coffee beans. I was able to pick up…9 I believe.

Afterwards, I quickly bought a light stick from the official KCON merchandise booth and headed over to the concert.

Enjoy photos of GOT7, Monsta X, Roy Kim (which many people rudely took his performance as an ‘intermission’), SISTAR and Super Junior!

After that I rode the metro back to my hostel. Oh yeah, since my friends weren’t able to make it I booked a hostel, which is where you stay in a room with other people. They had lockers and I brought a padlock, so my stuff was safe. I had to claim my bed with my 2NE1 sweatshirt, but all was well. I did however not like the rug-like blankets very much.

The concert ended at about 11:45 PM and it was about 1:45 AM when I finally made it ‘home,’ exhausted, I collapsed and fell asleep.