The last day. I couldn’t believe it. A whole week in Cali, almost coming to an end. As I got ready to leave for the train, all that I could think of (besides, ‘OH MY GAWD, SHINHWAAAA!) was that it was the last day, what would I do? Would I buy anything? What would the concert be like?

I got there a little early and sat to wait with some girls who happened to be Shinhwa fans. I was overly excited. As we went in, I walked around for about half an hour before I left to wait in line for Block B‘s fan engagement.

So after that, I went BACK in line, for SHINHWAAAAAAA!

So after THIS, I was second guessing going to Red Velvet‘s fan engagement. My legs hurt like hell, and my battery was almost dead. I headed back, and sat in the verizon lounge to charge my phone. I was talking to a girl and suddenly, I stopped.

I shit you not, my heart stopped. It was Danny Im, and I was going to just sit there, but I got my ass up unplugged my phone, and took a shit ton of pictures.

I wanted to work up the courage to take a photo with him, but I chickened out. I tried again, poked his shoulder and pretty much whispered, “Mr. Im?” before I gave up again. He had to rush off to rehearsal and looked pretty tired. He was busy bringing people in to the Come2Us booth at the time with Masta Wu, so he was there as well.

My legs felt like jelly and my heart was pounding. I wish I could have spoken up, but I couldn’t bring myself to do it.

But here are pictures: 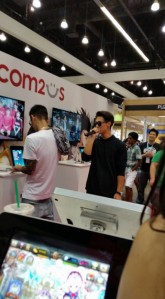 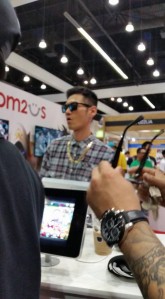 After that, I went to eat something since I was starving and made a decision: I did not fly from Iowa to California to be a lazy little shit. I was GOING to see Red Velvet and attend the Red Carpet. And I did.

But before I did that I bought some crap. Like a Block B fan + pin, and before I went to the concert, I gave in and bought the Shinhwa poster. 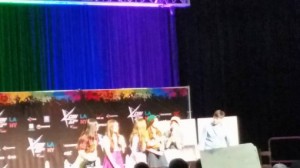 After THAT, was the Red Carpet, with all the artists that were performing/announcing that night (PS I guess I didn’t get any footage/photos of Red Velvet for the red carpet, and I guess I don’t have photos of AOA either. BTW, All the pics this day were taken with a selfie stick, and the button didn’t work, so I had to reach up and do it manually):

And here are the photos from the concert:

The concert ended at 9:45. I was a little disappointed that it wasn’t longer, but it was amazing nonetheless. I went back to the hostel, packed all my crap into my suitcase, and forced myself to stay up. All night.

At 3 am, I checked out but stayed in to wait for my ride. Around 4 AM, I got a little worried and called. Apparently my ride had been scheduled for SEPTEMBER THIRD, NOT AUGUST THIRD, so I got a refund, and had to schedule a new ride that luckily arrived within minutes.

Got to the airport, left at 6 AM tried to sleep but couldn’t because a tiny child kept kicking me while they were sleeping, arrived in Pheonix around 8, waited until 1 PM during which time I actually fell asleep in the airport waiting area and finally fell asleep on the plane, flew to Chicago, landed at 7 PM, waited an hour, FINALLY flew back to Iowa around 8 and couldn’t sleep anymore, landed around 9 but didn’t get home until damn near 11 PM. Finally fell asleep around 12 AM.

I should go back to sleep, but I just wanted to share my experiences with you guys. KCON was amazing, and I plan on doing it all over again next year.

Things to plan for next year:

1. A nice new camera that automatically adjusts the light so nobody looks hella whitewashed and has a nice zoom

3. Probably plan to go alone, just so I actually have money next time. I survived on the complimentary breakfast (which was actually pretty good, because it was for the whole hostel, so there was bread, bagels, fruit, coffee, tea and orange juice laid out for everyone every morning), bottled tea and trail mix until I went to J-Town. Seriously, that was my first actual meal outside the hostel since I had been to California.

Thanks for reading about it. I was pretty stoked to share everything with you guys. I have some photos up on my Instagram and videos and lots of pics on my personal Facebook, which I’ll be sharing on MsThugBear‘s official Facebook page soon.

Look forward to it! See you next year, KCON!