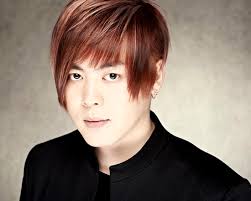 So, I like H.O.T, and was ecstatic to find out that he was in the H.S.J.R video, “May I Love You,” aka, “I Can Do It,” with fellow member Tony Ahn and other idol group members such as Andy from g.o.d, Eun Ji Won from Sech Kies and Myung Hoon from NRG, the group that originally sang the song.

In the video, HeeJun does all that hip thrusting, and I was like, “Damn, honey! You’re giving Simon Stawski a run for his money!” He looks like he hasn’t aged a day since his days in H.O.T. Obviously, once H.O.T and jtL disbanded, it was only time until they all released at least one solo album. Moon HeeJun tried out rock.

OH MY GOD, I LOVE HIM! I’m pretty sure he just knocked Kangta out of 1st place for my H.O.T bias. His style is extremely close to J-Rock, which I love with all my SOUL! My favorite song by him is “Toy.” His voice just suites the song and the genre so well! I love it! It’s one of the best songs I’ve ever heard!
Then, I went searching for more, and I found other great songs, which I shall leave for you below.
I guess when he went into the rock genre, we wasn’t very welcome. There were tons of anti-fans, and it made him feel like he should quit.

That is so fucking rude. Excuse him for trying to do something that he wanted to do, and from my personal opinion, was good at. Fuck you, haters. Why would you do that? What is the point? in this article, it talks about how he wanted to quit music because of all the hate he was receiving. Excuse him for not pulling a Kangta and going into Pop/R&B.

The first solo song of his I listened to, which was before the project group, was “I’m Not OK,” which is a techno-y dance track. I really like the choreography, and the song ain’t half bad neither. He is so cute with red hair! I like him with the purple hair too though. And on another note, I’m pretty sure he’s been rocking that same hairstyle since H.O.T’s 5th album, “Outside Castle.” It looks good on him ^_^

Anywho, here are the links! I hope you enjoy the songs as much as I do. The video for “SM” I guess is a mish-mash of video and audio from Fly To The Sky, H.O.T and HeeJun. Whoever put that together though, made a pretty coherent music video.

Links:
I’m Not OK
Toy
Scandal
Red and White
Alone
Human Individual Cloning (I have no idea if this is the real name of the song, but it’s pretty badass)
Soul (this one is a bit freaky. Don’t watch if you don’t like blood)
Our Story (Part 1 of Alone)
Generous
Silent Conflict
A Village Called Memories
SM
Obsession

I hope you enjoy him as much as I do! ^_^ Too bad he only has one album on American iTunes.

One thought on “Moon HeeJun”